Allergies and Autoimmune Diseases – Does the Hygiene Hypothesis Hold the Key? 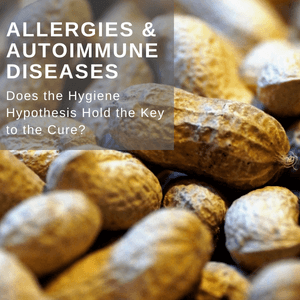 What if allergies and autoimmune diseases don't mean that you're sick? What if they mean that our environment is changing way too quickly!

​“​If you have an ​allergies or autoimmune disease, the genetic tendencies that underlie these disorders helped us survive in other environments… It doesn’t mean you’re a sickly person.  It means that you’re a person who is better at fighting off something in the past and you’re just in an environment ​ where that sort of firepower ​increases the risk of self-attack or inappropriate immune response. You just evolved in a very different environment than the one you’re in today."

Author of "An Epidemic of Absence"

​If you let this idea sink in, an entirely new world of possibilities opens up.  ​This is how I felt when I first read An Epidemic of Absence: A New Way of Understanding Allergies and Autoimmune Diseases​, ​​by Moises Velasquez-Manoff​.  ​

It makes the argument that allergies and autoimmune diseases are the result of our evolving alongside parasites, bacteria, and viruses to which we are no longer exposed.

To say that I love this book is an understatement.

In my opinion, this book needs to be required reading for medical professionals and anyone interested in the immune system. ​​​

After reading ​and reviewing An Epdemic of Absesence I wanted to know more - WAY MORE - so I reached out for an interview with Mr. Velasquez-Manoff.

​​Reading Moise's ​book, ​really meant me scouring it in hopes of finding some magic bullet cures that would help us ​heal ​of multiple food allergies, asthma, and eczema. And while I didn't find exactly what I was looking for - I ​did say that it inspired hope, if not a back up plan.

“An Epidemic of Absence” is an adept mash-up of history and science explaining how we humans have been co-evolving with parasites, bacteria and viruses so intimately, and for so long, that we ​have metaphorically outsourced some of our vital immune functions. Or at the very least, we’ve come to expect certain interactions, or battles, without which our immune systems miss key education and opportunities​.  Instead we react to foods and pollens with allergies, or to our own bodies with autoimmune diseases.

Moises’ book reaffirmed my interest in probiotics, ​explaining some of the latest research about how, depending on the strain, probiotics can either push the immune system closer to or further away from allergy. He inspired me to investigate helminthes, specifically TSO (trichisuris suis ova), and challenged me to think about allergies and ​autoimmune diseases in a new way.

​Read An Epidemic of Absence ​or my review ​"The Hygiene Hypothesis and Asthma..."

The most significant takeaways from ​my interview with Moises Velasquez-Manoff​​:

Interview highlights with the matching time codes on the video:

1:18 – Moises ​talks about his own food allergies, asthma, and autoimmune alopecia which lead him to explore helminths​.  He also discusses how allergic diseases began to wreak havoc in the late 19th century - hello clean water, ​pasteurized foods, toxins, "better" medicine.

3:55 – Research reveals that there is an inverse correlation with certain parasite infection and allergies, asthma, and other immune modulated diseases. There is a scientifically informed nascent underground movement of people self-infecting with the hookworm “​necator americanus,” tapeworm, and other parasites for their potentially potent anti-allergic and immune-modulating effects.

5:10 – Moises decides to join this movement and self-infects with 30 hookworm larvae – which lead to a host of symptoms, but also cause his hay fever and eczema to intermittently subside.

6:30 – Why Moises ultimately decided to kill his colony of hookworms after his symptoms (side effects of helminthic infection and allergies) never completely abated.

10:40 –  Some people were able to infect with 50 hookworms without any side effects. Painful symptoms are the host’s own immune response to the hookworm.

13:15 – Moises talks about how he “tested” his sesame allergy and peanut allergy while infected with hookworm.

14:20 – Exploring new ways to think about the emergence of modern diseases. A potential prescription of preventative treatment is laid out – in which exposure and probiotic treatments would be used to encourage developing healthy immune systems.

16:00 – It may be that proper immune education begins at pre-conception (both maternal and paternal microbiomes matter) because these beginnings leave epigenetic imprints that can be conveyed by both sperm and egg.

19:23 – Reactions of hookworm carriers will vary greatly (from horrible symptoms to none) due to the immense diversity of immune systems. Growing up with chronic parasitic infection presents very differently than first infecting as an adult.

20:00 – Microbiome of Amerindians recently discovered to contain 150% bacterial diversity of western microbiome. These Amerindians are also highly parasitized and hosting helicobacter pylori so there is a robust interplay between all organisms and host.

22:42 – The different strains of Helicobacter Pylori (African, European, and Native American strains) can be beneficial or harmful depending on genetic backgrounds.

24:19 – Part of risk of gastric cancer from Helicobacter Pylori may have to do with whether or not the strain is native to an individual’s genetic origins.

28:15 – Study on adults who took up farming in Denmark and its effect on preventing the acquisition of new allergies.

31:00 – Immunotherapy works. Its possible to re-educate an immune system with allergies, it just takes time.

32:00 – Discussion of probiotics and peanut protein study that seemed to accelerate tolerance. (side note – according to the lead author on the study – the difference between OIT with probiotic vs. OIT alone was tolerance versus desensitization. Read Allergic Living interview and article. Study here.

The strain used was Lactobacillus rhamnosus CGMCC 1.3724 and 5 grams of it to boot.

33:30 – Moises wrote the book with the hopes that it would awaken in the siloed groups of scientists (parasitologists, gastroenterologists, immunologists) the desire to work together and better test some of the hypotheses he lays out.

35:00 – In this day and age, chronic disease presents the largest threat to our quality of life and our lives in general. Acute disease is no longer the biggest killer; its chronic disease.

37:00 – Danish parasitologist elects to self-infect with tapeworm and has no symptoms – despite hosting a potentially 30-foot guest.

39:00 – It’s been found that the people with the strongest allergic response had the fewest hookworms. (HH note: basically the stronger the attack against the hookworm, the more symptoms the person experiences. The less strong the immune response to hookworm, the less symptoms of infection – sometimes none.)

40:37 – Science has just woken up to the forgotten organ (the microbiome).

43:25 – We need to understand the nuances of parasitic infection and other microbial stimulants because studies have revealed that occasional exposure (vs. chronic) can actually ramp up allergic response. So these things need to be better understood before being embarked on because it’s possible to get more of what you don’t want happening.

47:15 – “One thing I’d hope people would take away from the book is - if you have an ​allergies or automimmune disease, the genetic tendencies that underlie these disorders helped us survive in other environments… It doesn’t mean you’re a sickly person. It means that you’re a person who is better at fighting off something in the past and you’re just in an environment with that sort of firepower that increases the risk of self-attack or inappropriate immune response. You just evolved in a very different environment than the one you’re in."

That’s the problem - the world has changed!

Read the Q&A with Dr Xiu-Min Li where she discusses using Chinese herbs to switch the immune system from allergic to non-allergic.  She too discusses the concept of epigenetics.

R Lipoic Acid – The Different Forms of Lipoic Acid, And Why You Should Care!
Immune Boosting Herbs
Treatment for High IGE Levels in Asthma and Food Allergies
Allergies and Autoimmune Diseases – Does the Hygiene Hypothesis Hold the Key?
The Hygiene Hypothesis and Asthma and Allergies and Eczema: An Epidemic of Absence
20 Vitamins for Allergies, Asthma, and Modulating the Immune System
Summary