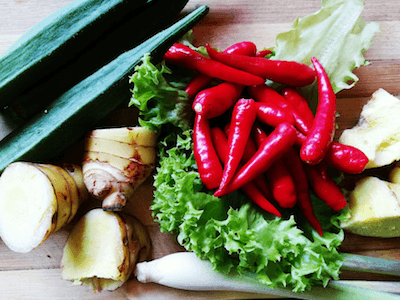 ​I Didn't Realize the Pain Was Caused By an Ovarian Cyst

The pain started back in January of 2012.  And honestly at first I thought it was a gas issue. Nothing pretty to discuss there - but ​that's what I thought. At the time also I was beginning Bu Zhong Yi Qi Tang for the staph infection on my face (MRSA) - which according to my herbalist could cause some intestinal distress.

So I shrugged the pain off.

Eventually, as the months moved forward, the pain totally took me over.

I couldn't sleep on my right side because the weight of my own body on that side hurt. It was a constant pain that woke me from sleep and followed me everywhere. There were many instances where I would white-knuckle it ​until it subsided.

​At the time I was uninsured. But in desperation, I went to ​see a primary care physician, who took my money and then sent me home telling me to avoid dairy (which I told her I did). She too thought it was a​n intestinal issue.

Needless to say, I ended up in the ​emergency room in August.

​The ultra sound ​showed an enlarged follicle, aka., ​ovarian cyst ​on ​my right ​side. Crap that hurt.

At the time, I ​was drinking apple cider vinegar, ​taking Chinese herbs (a custom recipe from my herbalist) on and off, taking magnesium.... you name it - to get the pain to subside.

The Chinese herbs would make the pain go down significantly, but not all the way.  And when I stopped them, the pain would come roaring back.

​I noticed that after my period the pain would ​increase. ​During my periods, it seemed less, but that could also be that my period cramps hurt more and so they drowned out the right ovary pain. Ugh!

Of course the obsessive worrier and internet searcher that I am, I found some interesting research ​about iodine​ & ginger and ovarian cysts.

​Ovarian Cysts Are Mini-Traumas on Your Ovaries

​Ovarian cysts are formed when either the egg-releasing follicle doesn't open and release the egg OR it does, but then doesn't dissolve.  This process of bursting and dissolving, AKA., ovulation, is essentially a "mini-monthly-trauma."

Ovulation is considered to be an inflammatory process which involves repeated minor trauma to the ovarian surface and exposure to estrogen-rich follicular fluid, cytokine

release, influx of inflammatory cells to the ovarian stroma, production of reactive oxygen and nitrogen species (ROS and RNS), and remodeling of the extracellular

And so based on this view of ovulation, menstruation, and ovarian cysts, it makes sense that lowering the inflammatory response and certain chemicals in the body may be able to positively effect the ovaries and any ovarian cyst production.

​Ovarian Cysts:  Ginger & Lugol's Iodine Do the Trick for Me!

​Ginger and its constituents ​are known to possess potent anti-oxidative, anti-inflammatory and antiapoptotic properties.  ​I've used, and continue to use  ginger ​to help with endometriosis pain.

Ginger is sooooo powerful, that when I​ use, I feel ​its effects within the first twenty minutes.

If you use supplements or herbs for your health, you know most of these things are a slow burn.  It takes time to feel their effects .... over days, weeks, and even months.  And honestly, some of these things may not create an effect that you can feel.

This is what makes ginger so compelling.

​​I prefer to use ​fresh ginger (gingerol is most abundant constituent in fresh form).

I ​blend a piece ​about 3/4-1 the size of my thumb in a couple ounces of apple or carrot juice, swig it back, and wait for the warm tingling sensation in my lower abdomen.  (​I'm not kidding about that).

​You don't even have to do down the rabbit hole of iodine ​and health​ to know that iodine is necessary and, of course,  the standard American diet is deficient in it.  Most of us don't eat enough iodine containing foods, outside of iodized salt, and our soils are not rich with it.  And when you compare the RDA of iodine in America to the amount that the Japanese eat, you'll see that it's debatable whether or not we are actively trying to keep people deficient. (​2)

Iodine has always been on my radar.

My mother used to smother our throats when it when we were sick.  She would also try to sneak it onto and into things, usually unsuccessfully since the taste is pretty strong.  So it's been in my sphere of influence for my entire life.

Additionally, my mother has hypothyroidism; and so, she has been supplementing iodine for years.

When I dug into ​the research surrounding iodine, I discovered somethings that made me feel like its addition to my protocol would be helpful.

​I was primarily interested in the connection between iodine and the thyroid AND iodine and estrogen.

It's well documented that iodine's absence can lead to hypothyroidism.  And, ​hypothyroidism is ​potentially causally related to estrogenic tumors of the breast, uterus, and ovaries. (​3)

I'm not saying that ovarian cysts are tumors.  ​But experts have found that low iodine levels can lead to estrogen dominance, which is a promoter of ovulation and ovarian cyst growth.

​Iodine does not only effect the ovaries through the thyroid, but also through its interaction with estrogen.  In fact, estrogen can block the absorption of iodine.

​My Goal With My Protocol for Ovarian Cyst Pain

So I designed my own protocol to:

​My protocol consists of:

​This combo made a HUGE REDUCTION in pain! It was as immediate as an advil.

I cycled on and off my protocol three days on, three days off, for a couple weeks until the pain completely disappeared.

Every now and then, I will get the beginnings of the pain again, so I know this issue needs to be consistently managed.  And when I do, I just go back on my protocol.

3. Di-iodothyronine as part of the oestradiol and catechol oestrogen receptor — The role of iodine, thyroid hormones and melatonin in the aetiology of breast cancer Clur, A. Medical Hypotheses , Volume 27 , Issue 4 , 303 - 311