The Best Plantar Wart Remover: What Worked For Me After Spending Over $800!

​When I say that this is the best plantar wart remover, I am not kidding.  Five years later, I continue to be wart free after the entire ball of my foot and my finger ​were covered in plantar warts.

​I spent months, SIX MONTHS​,  ​money​, $800 ​IN CO-PAYS AND OVER THE COUNTER WART REMOVAL PRODUCTS​, and pain,  LOTS AND LOTS OF​ PAIN​, ​cutting and burning at the podiatrist and the dermatologist​ and I ended up with more plantar warts.

I seem to subconsciously subscribe to the do everything wrong before I get it right philosophy.

I had what I thought was a callous that had been on my foot (the pad below my big toe) for years.  Even my mother thought it was a callous (the apple doesn't fall from from the tree).  And one day she blurted out "Good grief! Will  you buff that thing down already!"

I thought wow, that's interesting... I must need to buff harder and longer.

I buffed so much that it hurt... I thought well no pain no gain.

​Within days it grew ​until it covered the entire ball of my foot under all my toes. ​As a bonus, it also spread onto my middle finger along the side of my nail.  At this point the bell finally went off.

THIS CAN'T BE A CALLOUS! 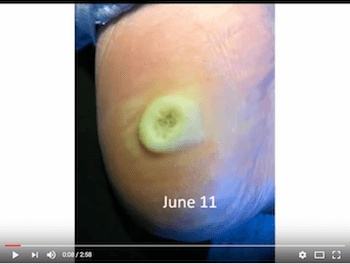 ​This is not my wart. But my wart looked like this - except about 6 times bigger as it covered the entire area under my toes.

I was getting a check up at my doctor and asked about these alleged "callouses."  He smiled and responded, "Those aren't callouses, they're PLANTAR WARTS."

Cut to:  the podiatrist  (Because you know a regular doctor doesn't touch those things.  You need a dermatologist or a podiatrist, if it's on your foot.)

"Yep that's a plantar wart alright and a big one.  What d'you do, buff it?" said the podiatrist.

So he cut, scrapped, froze.  I requested he do the wart on my finger.

"I can't touch your finger, I'm a foot guy.  You'll need to see the dermatologist."

​So I went to see the dermatologist since ​he could do it ALL.

Months of Cutting... Scraping... Freezing with nitrogen... And Salcylic acid ​in between these painful appointments.

This all caused ​AGONIZING PAIN.

Now I have a high tolerance for pain, but this shit was ridiculous throbbing pain.  I could barely walk because of the plantar wart on my foot.  I'd hobble for weeks before needing to return for subsequent floggings.

After 6 months, he barely made a dent in what had become, after my buffing escapades a plantar wart that ​looked as if it were going to cover my entire left foot.

He did that sighing moaning thing that doctors learn in medical school - the thing that lets you know that you are pushing the bounds of their day to day practice and their mental hard drives are spinning back to med school days.  And then he silently stepped out of the room and returned with some syringes.

"Read this," he said as he plunked a brochure with a smiling faced model on the front cover.

"Read it over and I'll be back in a couple minutes​.  We can just load you up and you can go home.  This should do it."  He said leaving the room again.

The sheet listed contra-indications and potential side effects of this chemotherapeutic injection.

I now realize that even antibiotics can be considered chemotherapy (chemical therapy - get it), but at that time it seemed to be way to foreboding for my neurotic female woody allen brain.

When he returned I told him I ​needed some time to think this through before committing to those injections in my body.  He assured me it was localized, so not systemic.  And the gist of it was - irritate the cells there enough that they wake up and basically assist in annihilating this pesky ​and ginormous plantar wart on my foot.

I left ​his office, thinking well I'll be covered in a callousy plantar wart before I go that  chemo injection route.

So I went home and did what any self respecting person would do, I ​googled:

​Here are the plantar wart removers that DID NOT WORK FOR ME:

​Here ​is the only plantar wart remover that FINALLY DID ​WORK FOR ME:

But you can't just rub it on, because I tried that and it DID NOT WORK.  At least, it did not work in the 1-2 week timeframe I had expected in my mind.

This process is so simple, it's going to seem like it is too simple.

Here's what happened to me:

Some people may need to leave it on longer.  Also, I kept applying the ACV for a couple days after it had entirely disappeared.

I did not buff or do anything else.

This person used apple cider vinegar to remove their plantar wart as well.  But it took them several months.

From what I read from their process the reason it took so long was because they did not wear the ACV bandage on their plantar wart all day.  They took it off and wore duct tape during the day / ACV at night.  Also, the buffed, which in my opinion is not a good idea because it spreads infected cells to other skin.

However, with all that, they did get rid of their plantar wart using apple cider vinegar.

​Why is Apple Cider Vinegar the Best Plantar Wart Remover?

One reco: go for this Vinegar

- I cannot vouch for any other brand or filtered/pasteurized versions.  Plus after hundreds of dollars in co-pays without any results on the line -​ DO NOT GO cheap on these things.

I also used these bandages (found they had the best sticking power and they kept in the vinegar).

I think the other thing to consider if you get warts easily is looking for ways to boost your immune system.  I also suffered a MRSA skin infection on my face and found this vitamin C to be the best immune booster available.

How to Get Rid of MRSA Staph Infection – Our Story
MRSA 2 years later
MRSA boil topical approach
MRSA and Vitamin C
Summing up what worked for MRSA for me
Sinus infection, throat infection, impetigo and Bu-Zhong-Yi-Qi-Tang
Summary